A guide to raising healthy, happy chickens without antibiotics 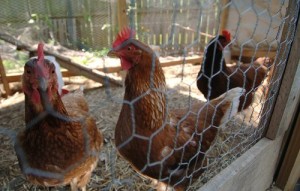 Raising chickens is smart. It provides you a healthy supply of food in the form of chicken eggs, and you’ll even have a source of emergency meat if times get really bad.

Chickens largely take care of themselves. They’re friendly, curious and smart enough to come running when you call them. They’ll devour scorpions, ticks, crickets, and even the occasional small lizard, removing all sorts of insect pests from your property.

I’ve been raising chickens for several years now, both in South America and in Central Texas, and I’d like to pass along what I’ve learned so that you can raise healthy chickens, too!

The secret to avoiding disease: Nutrition and oregano

To keep your chickens healthy, you’ve got to feed them trace minerals. They need strong nutrition to fight off infectious disease. Because they’re literally cooped up during the night, chickens are especially susceptible to diseases that spread easily from one chicken to the next, so you’ve got to keep their immune systems in high gear.

On top of that, I put a dropper full of oregano oil extract into their water each day. My experience is that chickens who are raised on oregano are far more resistant to disease than chickens without oregano. Oregano replaces antibiotics in chickens, it seems, at least in my experience. I’ve never had to resort to using antibiotics.

I lost several chickens along the way while trying to figure this out. I discovered that colloidal silver in their water didn’t do much, at least not for the Avian Pox disease that some of my chickens caught. (Yeah, chicken pox, literally!)

I am absolutely convinced that chickens need sunlight to stay healthy. My chickens will often lie down on one side and extend one wing in order to allow sunlight to penetrate all the way into (and underneath) that wing. This seems to be a king of “sunning therapy” that chickens pursue by instinct.

If you keep chickens in an artificial indoor environment, you will only encourage the spread of disease, the growth of fungus, and will end up raising weaker chickens with weak immune systems. Sunlight makes chickens stronger, so the more your chickens can get outdoors and run around in the real world, the healthier, happier and more productive they will be.

A lot of people who are new to raising chickens make the mistake of trying to keep them artificially warm during cold winter nights. As long as you keep chickens out of the wind, they can stay warm on their own, usually with just the help of some cracked corn in the evening. (Food equals warmth when it comes to chickens.)

Birds and ducks do just fine in freezing weather during the winters, have you noticed? So why would chickens need special heaters? Unless you’re living in the frigid north, you don’t need to provide supplemental heat to adult chickens, even in freezing weather.

Baby chicks, of course, will freeze to death very easily, even in mildly cold weather, so you’ve got to keep them warm. But adult chickens are well equipped with their own insulation. The important thing is to keep them out of the wind. That’s why you’ll need a wind-proof chicken coop so that the wind doesn’t sap the warmth out of them during a cold winter’s night.

I’ve raised all the following breeds of chickens, and here are my comments about each one:

• Americana – Moody and strange. Sometimes anti-social. Beautiful show birds, but not the kind of “utilitarian” birds you really want on a working farm for producing food.

• Leghorn – Great egg layer, not very trusting of people, however. You’ll have trouble catching these birds.

• Delaware (white) – Great hybrid bird for creating eggs and meat, but not the best at either one. They get quite large compared to other breeds, and they have strong appetites. One major drawback to these birds is that they are pure white, making them easy for predators to spot from long distances. More natural-colored birds blend in better with the terrain.

• Barred Rock – I like these birds, they’re easy to handle, fairly productive and seem to be a hardy breed. This is my second-favorite breed.

• Rhode Island Red – By far the strongest survivors of all these breeds, Rhode Island Reds are very close to a perfect breed of farm chicken in my opinion. They’re also relatively friendly and easy to handle. During the spring and summer, my Rhode Island hens are laying 6 – 7 eggs per week, each!

Everything in the world wants to eat your chickens. To the wild animals living in the country, your chickens are like walking Happy Meals, just ready to be devoured. So the first thing you need to realize about keeping your chickens alive is that you’ll have to protect them from predators.

If you live in a suburb or a city, you might not have very many natural predators, but if you live out in the country, you’ll attract all sorts of them. To effectively protect your chickens from predators, you’ll need to own, at minimum, one shotgun and one rifle and know how to use them.

Here’s what they’ll be facing (and how to deal with it):

• Snakes. When your chicks are small, they’re bite-sized snacks for all sorts of snakes. You’ll need to keep your chicks in a snake-proof cage at night (that’s when snakes hunt). You can also expect to lose a fair number of chicken eggs to non-venomous snakes during the day.

How to deal with snakes? You can lay down some snake repellant made out of cedar wood, but that stuff only lasts a couple of weeks before losing its potency. Here’s my strategy: If it’s a rattlesnake, shoot it and throw it to the birds of prey (far from your chickens, of course). If it’s not a rattlesnake, capture it with a snake grabber (be careful, obviously), drive it at least a mile away, and release it there. Try not to release it in your neighbor’s farm, as that would be rude.

• Owls. Owls are vicious, silent night hunters. They can devour fully-grown chickens. Fortunately, owls only hunt at night, so locking your chickens up in an owl-proof coop or cage takes care of that. But if you forget to close the coop, you can fully expect to lose chickens during the night.

• Feral cats. Cats love to attack your chickens, just for the fun of it, it seems. Dealing with cats is up to you, but if it’s a domestic cat, I suggest you try to capture it and return it to its owner. I have a “three strikes and you’re out” policy when dealing with cats that attack my chickens. The cat and its owner gets three warnings. After the third attack, the cat gets 62 grains of lead traveling at 2900 fps. Again, people who have never lived in the country can’t imagine this because they’ve never experienced the real world, but out in the country you sometimes have to choose between keeping your chickens alive or shooting a feral animal that’s trying to kill them. This is why every rancher needs an AR-15 or some other rifle (Mini-14, Ruger 10-22, etc.) to take care of persistent predators.

• Coyotes. Coyotes would love to eat your chickens if only they could reach them. Fortunately, coyotes are scared of humans, so if your chickens are close enough to your house (and well protected at night), coyotes shouldn’t be able to threaten them. On the rare occasions that coyotes have ventured to within eyesight of my chickens, I’ve simply grabbed my AR-15, fired a single shot in their general direction, and watched them scatter. Coyotes are smart animals and seem to learn from warning shots. (I don’t have experience with foxes so can’t speak about them.)

• Raccoons. If you raise chicken with raccoons anywhere around, you will have to deal with raccoons. They can smell chickens a mile away, it seems. I am very reluctant to shoot raccoons and have tried everything imaginable to scare them away without killing them. I’ve hit them with slingshots, tried to scare them with shotgun blasts, and even tried to get my dog to scare them away. So far, the results have been less than ideal. Roxy has killed two or three raccoons already, usually after loud and spectacular battles that left Roxy bloodied more than once. I’ve personally avoided killing at least half a dozen other raccoons that I could have easily shot. Instead, I’ve invested in raccoon traps that cage the animals without harming them. You can then cart them off to a distant location and release them there.

Warning: Be sure to wear very thick leather gloves when handling caged raccoons. They can reach right through the bars of most rodent cages and rip your hand to shreds with their razor-sharp claws.

• Hawks and falcons. It wasn’t too long ago that a large falcon — complete with a shrieking falcon cry — tried to eat one of my chickens just a hundred yards from where I’m writing this. I heard a terrible chicken cry, rushed outside to see what was going on, and saw a falcon flying away from one of my chickens, which was still barely alive. Upon inspection, the chicken turned out to be mortally wounded and missing a large part of its chest, so I did the moral thing and put it out of its misery with a couple of shots from my Benelli 12 gauge. I cursed the falcon, blessed the chicken, and made up my mind to mount a 20 gauge Remington on my farm ATV so that I could better defend my chickens in the future.

Are you shocked to read all this? Raising free-range chickens in the country requires a high level of vigilance against predators. Sure, you can raise chickens in a chicken factory without worrying about any of these things, but I want my chickens to eat weeds, bugs and wild foods. I want them to be happy, running around the farm, enjoying their lives while they provide me with eggs. So I refuse to coop them up in an artificial environment, and that means I have to take precautions to protect them from predators.

The good news in this is that all the practice with rifles and shotguns keeps me in top form with firearms — essential tools for living in the country. Like most ranchers and farmers, I now consider it fairly easy to hit a 10″ target at 300 yards, even with a semi-auto battle rifle that isn’t really very accurate compared to bolt-action hunting rifles. It pains me to actually have to shoot something with them, however, so I tend to use guns only as a last resort.

Whatever chicken coops you decide to use, make sure the bottoms are protected, too. Raccoons and other animals will actually dig underneath the walls of your coop to get inside and steal some chickens.

You’ll also need to clean out your chicken coops from time to time, and this is really one of the great “joys” of owning chickens: raking or shoveling poop by the bucket-load. Chickens are messy, and they produce a lot of poop and dropped feathers. So throw on a pair of gloves and a respirator, and get to it! Somebody’s gotta clean up all the s%*# around the farm, and the sooner you get the job done, the happier (and healthier) your chickens will be.

Make sure your coops can receive some direct sunlight inside by propping open the doors or windows. Sunlight helps prevent mold and fungus from growing inside your coop.