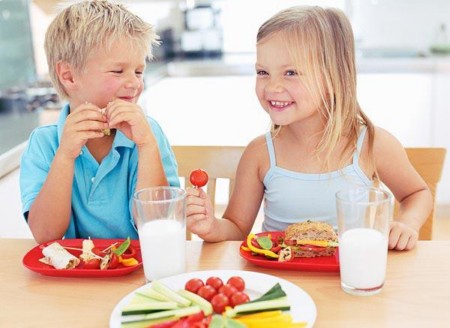 Most parents want to do whatever they can to ensure they give their children every advantage and opportunity to succeed in life. According to new research, that also includes making sure they have a healthy diet.

According to a new study led by University of Adelaide, public health researcher, Dr. Lisa Smithers in Australia, children fed healthier diets early on have slightly higher IQs, while those with heavier junk food diets have slightly lower IQs.

“Diet supplies the nutrients needed for the development of brain tissues in the first two years of life, and the aim of this study was to look at what impact diet would have on children’s IQs,” Smithers said.

Researchers compared a range of dietary habits from more than 7,000 children, including traditionally prepared food at home, pre-prepared baby foods, breastfeeding and “discretionary,” or junk foods. They looked at a link between the eating habits of children at six months, 15 months and two years, and their IQ at eight years of age.

“We found that children who were breastfed at six months and had a healthy diet regularly including foods such as legumes, cheese, fruit and vegetables at 15 and 24 months, had an IQ up to two points higher by age eight,” said Smithers.

“Those children who had a diet regularly involving biscuits, chocolate, sweets, soft drinks and chips in the first two years of life had IQs up to two points lower by age eight,” she added. “We also found some negative impact on IQ from ready-prepared baby foods given at six months, but some positive associations when given at 24 months.”

She went onto say that the study reinforced the need for parents to ensure their children eat right at an early age, to aid in their physical and mental development.

“While the differences in IQ are not huge, this study provides some of the strongest evidence to date that dietary patterns from six to 24 months have a small but significant effect on IQ at eight years of age,” Smithers said. “It is important that we consider the longer-term impact of the foods we feed our children.”

Along these lines, a separate study found that children with higher IQs at age 10 tended to become vegetarians by the time they reach 30.

“Vegetarians were more likely to be female, to be of higher social class (both in childhood and currently), and to have attained higher academic or vocational qualifications, although these socioeconomic advantages were not reflected in their income,” the researchers said.

“Higher IQ at age 10 years was associated with an increased likelihood of being vegetarian at age 30,” they added. “IQ remained a statistically significant predictor of being vegetarian as an adult after adjustment for social class, academic or vocational qualifications, and sex.”

They concluded: “Our finding that children with greater intelligence are more likely to report being vegetarian as adults, coupled with the evidence on the potential benefits to cardiovascular health of a vegetarian diet, may help to explain why higher IQ in childhood or adolescence is linked with a reduced risk of coronary heart disease in adult life.”