Proof That The Pineal Gland Is Literally A 3rd Eye 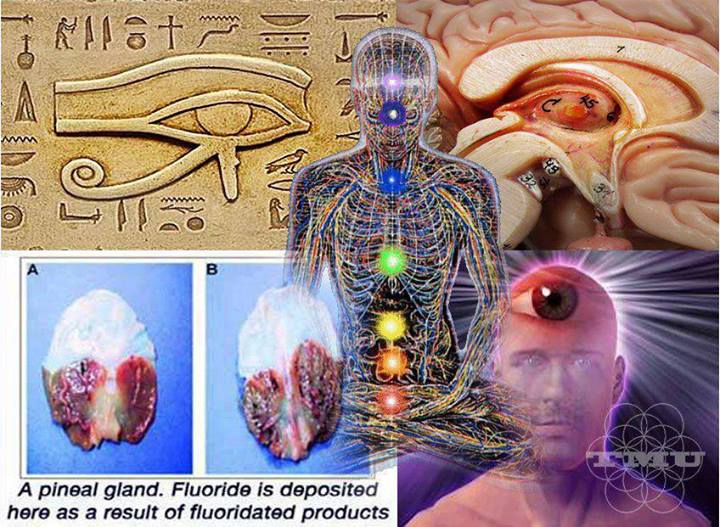 Is it possible that you literally have a third eye that connects you to spiritual dimensions?  The pineal gland is something that is spoken of the in the New Age community as being the intuition organ and the connection point between body and spirit, but very few people realize that the pineal gland is in fact a literal eye.

The pineal gland is a pea-sized gland in the exact geometric center of the brain and comes from the root word “pinea” which is Latin for “pinecone”.  Pinecone symbolism appears all over the ancient world from the Sumerian, Greek, and  Roman traditions, to the Vatican’s “Court of the Pine Cone” and staff of the Pope.

It is highly reverenced to be of high psychic and spiritual significance, and bindis are often word in Hindu culture as a way of signifying the pineal gland’s importance with spiritual wakefulness.  Why are so many ancient cultures obsessed with pineal gland symbolism?  The answer may be found when biophysical analysis is done of the pineal glands interior.

“Under the skin in the skull of a lizard lies a light-responsive “third eye” which is the evolutionary equivalent of the bone-encased, hormone-secreting pineal gland in the human brain.  The human pineal is denied access to light directly, but like the lizard’s “third eye,” it shows enhanced release of its hormone, melatonin, during the night. The challenge is to understand the mechanisms which regulate the synthesis and release of melatonin.  The pineal gland is the ‘mind’s eye.’  Dissected, the reptile’s pineal looks much like an eye, with the same shape and tissue.” – Dr. Cheryl Craft, Ph.D.,  Chair of the Department of Cell and Neurobiology, University of Southern California.

What’s fascinating is that the interior of the pineal gland actually has retinal tissue composed of rods and cones (photoreceptors) inside its interior lining just like the eye, and is even wired into the visual cortex in the brain. “The photoreceptors of the retina strongly resemble the cells of the pineal gland”. Dr. David Klein, Science Daily.  It even has vitreous fluid in it like an eye does.

An article in Science News stated the following:

“The retina and the pineal gland are the organs primarily responsible for the body’s recognition and sophisticated processing of external light. Until recently these two organs in mammals seemed to have little else in common and were consequently studied by separate groups of scientists. But a new alliance of researchers is now exploring striking similarities that are speeding research efforts in both fields. Their findings suggest that the pineal gland was the evolutionary precursor to the modern eye.  While it turned out that the retinal rhythm is independent of the pineal gland, once the groups of scientists began working together they discovered surprising similarities between the two organs, including the presence of photoreceptors.”

I think it’s a funny coincidence that the organ that has for thousands of years been called a 3rd eye actually has all of the components needed for a functioning eye.  It is possible that when ancient traditions spoke of a “third eye” that they knew what they were talking about? On top of all of this, the pineal gland is also thought to secrete a chemical known as DMT, which has the nickname of “The Spirit Molecule”.  DMT is believed to be release during dreaming, during spiritual and mystical experiences, and during the time of death.  It a chemical compound that, when ingested, has the most powerful hallucinogenic effects out of any other drug.  The molecule that is speculated to give us all spiritual experience just so happens to be housed in the pineal gland.

French philosopher René Descartes (1596-1650) emphasized the pineal gland in his writings, calling it the seat of the soul and “The part of the body in which the soul directly exercises its functions.” He contended that this was centre at which the soul and body interacted, and where we receive our messages from the Divine.  Even Jesus says in Matthew 6-22: “The light of the body is the eye: if therefore thine eye be single, thy whole body shall be full of light.”, so the idea of there being a spiritual eye is no new idea.

This is not proof that the pineal gland is a spiritual eye seeing into other dimensions, but it is proof that it has the biological potential to be an actual eye.  So now we have a solid scientific evidence to establish that the pineal gland is in fact a third eye, and we can now begin to speculate why it evolved and if it serves any purpose of spiritual significance.

For example, a lot of people who have had out-of-body experiences report a silver cord linking their astral body back to their physical body located either in between the eyes or at the back of the head where the pineal gland would be.  Could it be that our astral body, which exists in our physical body yet has access to higher dimensions, receives literal information from psychic and spiritual realms in the form of photons and images, which then get fired down the silver cord into the visual cortex of the brain where the pineal gland receives this information?  Is the pineal gland a little television for worlds unseen to the biological eye?  With the scientific proof that this gland can function like an eye, we now have these avenues open for speculation.

Unfortunately, the pineal gland can become calcified from heavy metals and fluoride which can restrict its biological function as a producer of melatonin (which regulates sleep cycles) and may also inhibit and psychic or spiritual function it may have.  Here is a video on how to decalcify your pineal gland:

Most are highlighted in the article.

Thanks to David Wilcock’s “The Source Field Investigations“