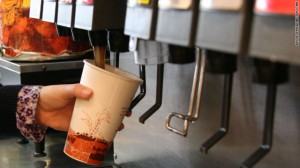 A new study from Hollins University tested 90 beverages from 30 fountains, and found that 48% of the sodas were contaminated with coliform bacteria. Coliform bacteria is a form of fecal contamination, and could stem from a number of sources. Whether the hygiene of the workers is to blame or not, the heavy contamination of soda fountains is still prevalent.

“You can get collections of bacteria in the water line and that then runs through the whole machine and gets in to the beverage. Any time any water or liquid sits somewhere, it’s just a breeding ground for bacteria,” commented Primary Care Physician Dr. Alanna Levine.

Even more disturbing is the fact that the bacteria was also found to be resistant to antibiotics, meaning it could actually be quite harmful if consumed. Most people might only respond with a stomach ache or flu-like symptoms, there is still room for potential harm. If you are already sick, or have a compromised immune system, then there could be a reason to be concerned.

Regardless of whether or not the fecal matter will cause you great harm, it’s still disgusting. The restaurants should be responsible for keeping their machines clean, and it should be made known the specific places tested. Besides the fecal matter, the food that fast food restaurants serve aren’t too much better, as the products contain additives such as MSG, aspartame, and GMO food ingredients.

Soda is Even Worse for Your Health

soda has been found to destroy kidney function and promote obesity due to its harmful ingredients. Diet sodas containing ingredients such as NutraSweet and aspartame have been found to cause brain tumors, especially in women. The neurotoxins present in soda inhibit cognitive function, and promote other brain disorders.

While fecal matter being present in your beverage may alarm you, the adverse health effects that are associated with soda should also motivate you to change your dietary lifestyle for the better.